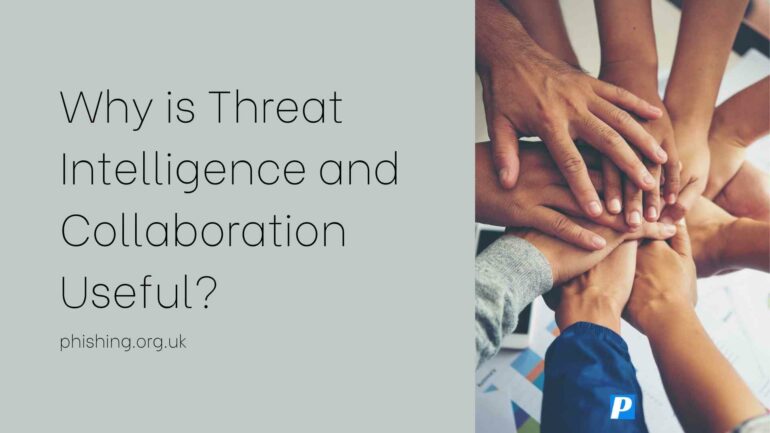 Why is Threat Intelligence and Collaboration Useful?

Nowadays, hackers plan their attacks very quickly. This situation has become worrisome for companies because it is now more difficult to defend themselves against attacks. Hackers detect your vulnerabilities and attack these points within a few days. Also, if they are successful, they often notify other hacker groups as well. Therefore, companies need to effectively share their cybersecurity intelligence with other companies in the same industry. But why are threat intelligence and sectoral collaboration useful?

Why is Threat Intelligence and Collaboration Useful?

Only this way, they can better defend against threats. This helps them quickly adapt to ever-changing phishing attacks. Most companies choose to work with cybersecurity companies to increase collaboration and gain access to best practices.

Here’s An Example of Why Threat Intelligence and Collaboration is Useful:

A well-known multinational investment bank based in Switzerland has recently begun using an exciting model to combat phishing attacks. The most important role in the creation of this model fell to the company’s CISO. They began to test the durability of the systems they use and measure the protection level of their cybersecurity teams. Using this model, they can also understand whether the company operates in compliance with cybersecurity laws and regulations. They use an interesting method in this model to further understand the success of their teams and encourage intelligence sharing with other companies in the industry. The method they use is called the war games exercise. For this, CISO and the company formed a partnership with the Financial Services Information Sharing and Analysis Center two years ago.

The employees’ task in the wargame was to protect a financial services organization very similar to their own company from phishing attacks. The attack targeting the company mimicked a WannaCry-like ransomware attack. The task of the employees who participated in the game consisted of defending this virtual network, which was identical to the company’s virtual network. The red team that carried out the attack was fighting the blue team that defended the company. For this purpose, the red team had to do their best to put the blue team in trouble. So they organized a highly developed and coordinated attack. CISO was able to test the cyber awareness of his company with this game. Also, because the game was coordinated with other companies, they understood how other companies would react in similar situations.

The CISO said the game is useful in seeing how different analysts interact with each other. He stated that it was delightful to work with the representatives of other organizations and that they understood the importance of cooperation and information sharing thanks to this game. According to the results, solidarity was very effective in the decision-making and response times of the participants. More than 10 financial services and trade associations, various banks, management, and finance companies collaborated with the company for the game. The managing director of the Financial Services Information Sharing and Analysis Center also said the group work increased this cross-collaboration. He stated that combining different information owned by different companies is very important in defending against attacks.

In addition to this war game, the company is also doing other important work to increase intelligence sharing and cooperation. They say threat intelligence helps hackers learn the different techniques they use. They use intelligence to develop their defense systems accordingly. Companies that belong to the threat intelligence group share information about leaks, threat actors, or vulnerabilities. The collaboration also includes sharing information about the security programs companies are running or planning to run and the strategies they are implementing.

According to studies, more than half of the companies have already cooperated with other companies or are planning to form a union. One of the most important benefits of threat intelligence is that it provides collaboration, enhanced security, and accelerates incident response systems. Also, the research revealed that collaborating companies faced fewer data breaches in the past year.

Why Do Some Companies Prefer Not to Share Intelligence?

We think the main reason for this is the lack of resources and the cost of participation. But on the contrary, researchers think that sharing threat intelligence reduces costs. Indeed, companies that collaborate save over $ 2 million, according to the latest data. Because collaboration helps companies understand and prevent risks.

Companies often worry that sharing threat intelligence will increase potential liability or anti-competition. But the bank’s CISO says that the fact that other banks are not attacked is also beneficial for them. Because attacks on others can also affect them. Collaboration does not hinder a competitive advantage, as they are all fighting the same threat actors. Despite this, half of the companies still do not share intelligence with other companies. These companies do not want to share intelligence whatsoever, especially with competitors or other companies operating in the same industry.

Experts think the only way to convince these companies is that their CISOs lead the sharing of threat intelligence. Many employees will be convinced that senior executives think that cooperation is beneficial, despite the concern that it will reduce competition. Also, managers must make a statement about the scope of intelligence sharing. Because intelligence generally does not contain sensitive information about the company.

Which Tools To Use?