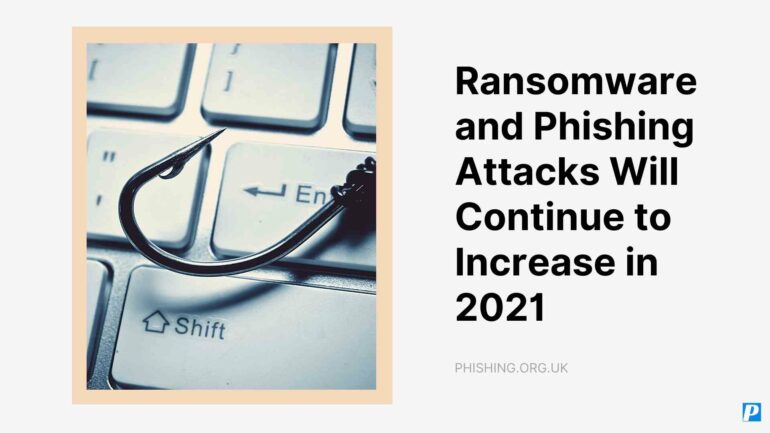 Ransomware and Phishing Attacks Will Continue to Increase in 2021

In 2020, we witnessed an inexorable increase in phishing and ransomware attacks. According to the latest research, ransomware and phishing attacks will continue to increase in 2021 as well. According to the research, hacker groups doubled the cyberattacks in the last year and seriously improved their attack plans. Hackers often targeted large companies with ransomware attacks and took advantage of COVID-19-related emergencies in phishing attacks. Especially with the transition to remote work, the confusion created by this transition has also been the subject of attacks.

According to the data, about a quarter of the attacks reported by the employees were ransomware attacks. In particular, attacks of “double extortion” attacks have been the subject of frequent reports. In double extortion attacks, hackers infiltrated the corporate network before encrypting the company they targeted. Fifty-nine percent of the ransomware incidents that took place in 2020 happened this way. So, one of the reasons for the increase of double extortion attacks is that hackers can bypass company protections such as backups and incident response in such attacks. A hacker group named Sodinokibi raised more than $123 million from the company as a result of double extortion ransomware attacks in 2020.

According to the estimates made by experts for 2021, ransomware attacks with double extortion content seem to continue increasing in 2021. An increase in these types of attacks can cost large companies dearly. So, companies that want to counter attacks will need to use much different defense tools.

In all the reports prepared by the best research companies, it is mentioned that ransomware has started to increase. Most sources cite ransomware attacks organized by hacker groups named Sodinokibi and Ryuk as the reason for this. In addition, new hacker groups named Egregor and DoppelPaymer are also making a name for themselves.

According to a 2020 report prepared by a famous research company, the reason for the increase of ransomware attacks is that attackers start to attack large companies and turn to encryption. An insurance company says the amount hackers wanted in attacks has doubled within a year. It was also caused by a ransomware virus that has been in circulation for a very long time. In addition, the WannaCry crypto-ransomware worm, which appeared in May 2017, is known as the most effective and only ransomware among malware in 2020. It is worrisome that cryptocurrency attacks take second place with this virus.

WannaCry ransomware does not seem to act according to this trend even in its 4th year. According to studies, this ransomware worm caused the majority of malware traffic in 2020.

Another type of attack that causes the increase in cyberattack traffic is phishing attacks against business emails, namely BEC attacks. According to another report examining the threats we encountered in 2020, the remote working system was very useful for hackers. Many employees working from home have been the target of cyberattacks. Service software (SaaS) applications have become a tool that hackers frequently use in phishing attacks. In the second place, there are webmail tools. In 2020, the finance and payment sectors were the most affected by such attacks.

The cyberattacks and data breaches are at the top, and it seems that they will continue in the same way in 2021. The most striking point in the report is the escalation of ransomware and phishing attacks. According to the report, in 35% of cyberattacks, hackers exploit vulnerabilities. Especially, there is an increase in attacks against the Linux system. A lot of data has become unprotected, with most companies moving to cloud-based storage. Linux-based malware also aims to take advantage of this situation. Hackers plan these attacks as cryptocurrency attacks. Bitcoin attacks frequently take advantage of vulnerabilities in the Linux system and the benefits of cloud-based storage.

Experts expect disinformation and fraud attacks to increase more in the coming years. Currently, hackers use deep fakes to develop fraudulent methods. Also, with this method, they will be able to do whatever they want by imitating senior executives in the future. If they develop themselves in this regard, hackers and hacker groups can organize advanced attacks by taking advantage of various events from epidemics to national problems. In the coming years, we can only protect ourselves against such threats by using machine learning and artificial intelligence.

Fortunately, companies do not remain indifferent to this increase. Thanks to the precautions taken by the security teams, it is possible to protect against these attacks with various methods. Here are the most effective tools against ransomware and phishing attacks:

Most Effective Tools Against Ransomware and Phishing Attacks

If you want to fight attacks, you should make sure your protection tools provide full protection. Our Email Gap Analysis tool detects vulnerabilities in your email services and helps you take the necessary action early. Click for more information.

All of us today are at risk at all times. To be able to defend effectively against these risks, we first need to understand how much at risk we are. Our tool collects and analyzes information about threats that could threaten your company’s security and pose a risk. In addition, it prevents data leaks and protects your reputation. Click for more information.